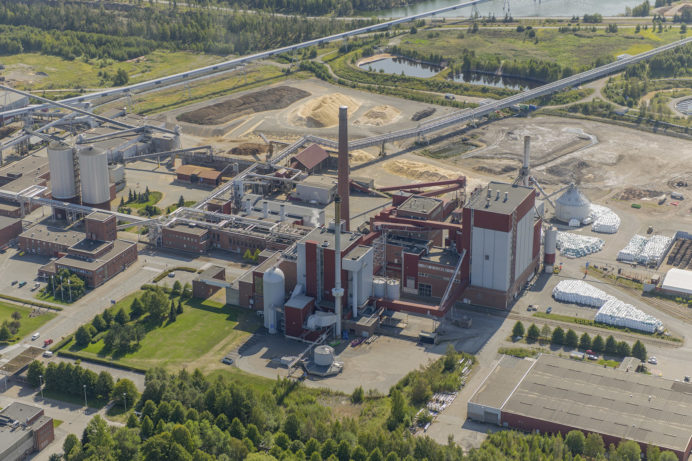 The Pohjolan Voima energy company is further expanding the use of bio-based fuels. This spring, sunflower seed shell pellets and bio-based lignin separated from wood will be tested at the Rauman Biovoima power plant. Pohjolan Voima’s goal is to stop using fossil fuels by 2025.

Rauman Biovoima is a pioneer in the use of various bio-based fuels in Finland. Pohjolan Voima, the main owner of the power plant, has been systematically decreasing its emissions since the 1990s. The electricity produced by the company is 96% CO2 neutral.

This spring, the burning of bio-based lignin and sunflower shell pellets will be tested at the Rauman Biovoima power plant. The new fuels are intended to replace coal, which is used as backup and extra fuel. A bio-based replacement is also being sought for oil. The share of coal and oil in the fuels of the biopower plant is less than 2%. The plant’s main fuels include the forest industry’s wood and logging residue. I addition, bio-sludge and separately collected recycled fuel are used.

Test burning of sunflower pellets started in March already. The burning of bio-based lignin will be tested in April.

“This forms a part of Pohjolan Voima’s long-term effort to achieve carbon neutrality. Our objective is to restrict the use of peat, coal, natural gas and oil to startup and backup fuel according to the market situation. At the same time, we are increasing the share of renewable materials in the fuels we use”, says Ilkka Tykkyläinen, CEO of Pohjolan Voima.

According to Timo Pitkänen, the managing director of Rauman Biovoima, the goal is to eliminate the remaining fossil fuels as quickly as possible. Peat is no longer burned at the Rauman Biovoima power plant at all.

“These new alternative fuels are important as their introduction could decrease emissions significantly. The share of coal in our fuels has been approximately 1%, but it has produced approximately 10% of the plant’s CO2 emissions”, Pitkänen says.

According to Pitkänen, oil is no longer burned at the plant apart from its use as startup fuel. The share of oil in the plant’s fuel is less than 1%.

“The next step is to find a biofuel to replace oil”, Pitkänen says.

Test burning operations are currently used to investigate the technical combustion properties of sunflower shell pellets and bio-based lignin, as well as their suitability for the plant.

“So far, we have introduced small quantities of sunflower pellets in the same boilers used for burning coal. The test burning has been possible without any technical modifications. A similar process will next be implemented with bio-based lignin”, Pitkänen says.

Bio-based lignin is a by-product of the manufacture of biochemicals. It is extracted from wood through hydrolysis. No chemicals are used in the process. The raw material for sunflower seed shell pellets, on the other hand, is the shell material left from the production of sunflower oil. The burning of bio-based lignin and sunflower pellets is supported by the fact that in addition to the carbon neutrality targets, they also help achieve the circular economy targets set by the owners. 72% of Rauman Biovoima is owned by Pohjolan Voima and 28% by Rauman Energia.

Rauman Biovoima Oy is a company of which Pohjolan Voima Oyj owns 72%. The company operates a biopower plant in Rauma in the UPM mill area. The combined heat and power plant generates heat and electricity for UPM’s paper mill and Rauman Energia. www.raumanbiovoima.fi

Pohjolan Voima is a diverse and highly skilled Finnish energy company. Our shareholders are also our customers: a wide range of Finnish industrial and energy companies. We produce electricity and heat for our customers at cost price with hydropower, thermal power and nuclear power. Our share of the electricity produced in Finland is approximately 20%. At the moment, 96 per cent of our electricity production is CO2 neutral. We create decisive power to strengthen competitiveness and contribute to a better tomorrow. Pohjolan Voima – Decisive Power. www.pohjolanvoima.fi